Omega-3 is a key family of polyunsaturated fatty acids that play key roles in maintaining optimal health. They are essential as the body cannot produce omega-3 from scratch and must get them from diet.

The three most important types of omega-3 fatty acids are alpha-linolenic acid (ALA), eicosapentaenoic acid (EPA) and docosahexaenoic acid (DHA). ALA mainly occurs in plants, while EPA and DHA are primarily found in animal foods and algae.

ALA is the most common omega-3 found in diet, including flaxseed, chia seeds, hemp seeds, walnuts, soybean, flaxseed oils and canola oils. Human body generally uses ALA for energy, but it can also be converted into EPA and DHA, two biologically active form of omega-3. However, this conversion process is inefficient in human body. Only a small percentage of ALA is converted into EPA and DHA before it can be used by the body for functions other than providing energy.

EPA and DHA are the most biologically active omega-3 that comes mainly from fish. Hence, they are also known as marine omega-3. EPA and DHA are dietary fats with a wide array of health benefits. Both EPA and DHA are imperative for proper fetal development and healthy aging. They are incorporated in many parts of the body including cell membranes and play a crucial role in anti-inflammatory processes and in the viscosity of cell membranes.

Low omega-3 status has been suggested as a global public health issue. According to a study published in Progress in Lipid Research (2016), much of the world’s population showed low level of omega-3 EPA and DHA. Another cross-sectional study of U.S. and German adults concluded that staggering 98% of the participants fell below the optimal range, despite sufficient knowledge of the health benefits and food sources of omega-3 (Nutrients9 (9) : 930 (2017)). Since dietary deficiency of omega-3 has been associated with an increased risk of various conditions, including inflammation, heart disease, stroke, dementia, ADHD, autism, depression, joint discomforts, dry skin and dry eyes, it is important to obtain sufficient omega-3. The Omega-3 Index test measures the amount of omega-3 (EPA and DHA) in the blood, specifically in red blood cell membranes. 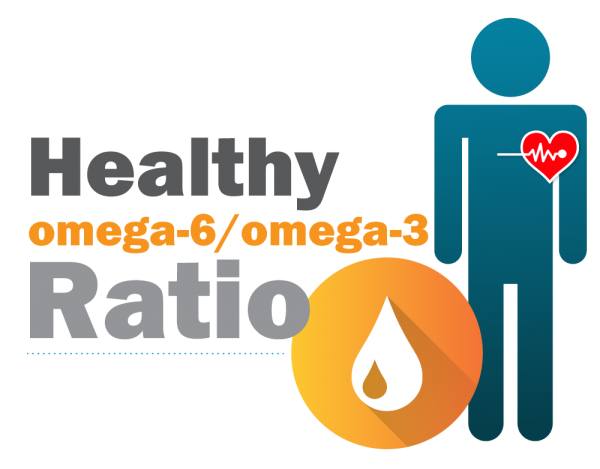 Importance of having a healthy omega-6/ omega-3 ratio

Modern diets are often high in omega-6 fatty acids and low in omega-3 fatty acids, resulting in a very high omega-6 to omega-3 ratio. Human beings evolved on a diet with omega-6 to omega-3 ratio of around 1:1, whereas the ratio from modern diet is approximately 15:1. This unhealthy omega-6/omega-3 ratio can promote the development of many disorders, including cardiovascular disease, cancer, inflammatory and autoimmune diseases. On the other hand, increased omega-3 levels or a low omega-6/ omega-3 ratio have suppressive effects and is desirable so as to reduce the risk of many chronic diseases. Hence, increasing omega-3 intake is imperative to restore healthy balance of omega-6/ omega-3 and optimal health.